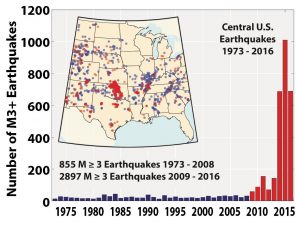 The frequency and intensity of earthquakes has increased dramatically in the United States. This is attributed to disposal of liquid waste from fracking and tertiary oil recovery activities, especially in the plain states. Kansas experienced a spate of quakes in fall 2014, and TBirdie Consulting was tasked with addressing the risk of seismicity in order to address EPA’s concern regarding injection of anthropogenic carbon dioxide in southern Kansas. We successfully developed a methodology to address the risk of seismicity within six months and our findings were shared with the scientific community at the Geological Society of America conference in spring 2015. Since then, the company has continued to improve methodologies for mitigating the risk of induced seismicity, which can assist our clients in developing operational strategies for liquid waste disposal in saline aquifers to prevent earthquakes.  The following information is needed to address seismic risk at a site: 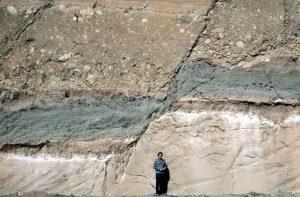 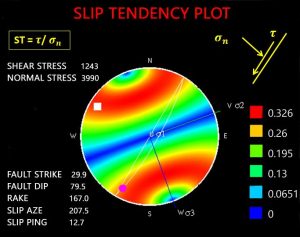 We utilize the various geophysical logs and injection tests to determine the stress field at a site. Seismic surveys can be conducted to identify faults in addition to utilizing motion sensors, such as seismometer and geophone, to delineate fault zones.  Advanced three dimensional stress analysis is conducted to calculate the slip potential of suspected faults so as to establish safe injection rates and volumes to prevent earthquakes. Scaling relationship between faults size and earthquakes are also utilized to estimate the magnitude of earthquake under the worst-case fault slippage scenario in order to characterize the ultimate seismic risk.